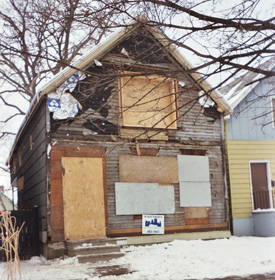 The challenge of finding homeowners insurance for properties once viewed “insurance easy” continues to plague home-buyers who are finding tougher guidelines and higher premiums from insurance carriers.

Insurance protection has not been easy on sellers, either.

Kitsap County’s Howard Miller, 51, decided to sell his three-bedroom, three-bath primary residence and move into a rental that he and his wife had owned for a few years. The residence, on a gorgeous acre with wonderful landscaping and a couple of ponds, demanded more time and maintenance that Howard and his wife now had time to give.

“We put it on the market last summer and the place still hasn’t sold,” said Howard, who admits not all families are devoted gardeners with the time and interest to maintain such a place. “We were just going to continue to leave it vacant and try to sell it, until we found out how much it would cost to insure the place.”

The Millers had an excellent relationship with their insurance carrier and had a flawless history with the two homes, two cars and a boat. However, because the primary residence was now unoccupied, vacant and for sale, the insurance premium had jumped to nearly eight times the normal rate.

“The premium for the previous year was $528 and the least expensive we could find now that it’s vacant was $4,000 a year,” Howard said. “I couldn’t believe it, but a friend told me he had the same experience with a home in his family.”

Insurance companies simply do not want to deal with unoccupied, vacant and for-sale homes. Their history charts show that these places stand a much greater risk of vandalism and problems created by neglect than an occupied home. A slow leak in a cold, unoccupied home has a greater chance of resulting in burst pipes and subsequent dry rot than a home that’s lived in every day.

So, what’s the insurance grace period when selling a home? If an employee is forced to relocate with little notice, put his wife, family and belongings in a moving van and go, how long will the vacant home be covered? Many insurance companies will give 60 days for a transitional “vacant” period as long as the premiums are paid. (Some states require that insurance carriers give 45 days notice when coverage is cancelled midterm. A 30-day advance is generally given for renewal notices but companies often allow 60 days to make up for mail time and weekends.)

Some traditional, major carriers have even adopted a moratorium on “substandard” or higher risk insurance. Unoccupied, vacant and for-sale homes have slid into this category. Special niche companies that continue to write substandard policies often impose a monthly quota on the number of cases they will consider.

Why are insurance premiums so high? Insurance agents and carriers also point to the numbers – claims filed involving mold, lead-based paint, asbestos, radon and urea formaldehyde are up significantly. While all of these environmental hazards have caused terrible losses, other industry costs – all passed on to the consumer – involve cases compounded by expensive legal proceedings where neither side receives any real benefit.

For example, a recent case involved a renter who died in a house fire. The fire marshal determined the cause of the fire was the renter’s smoking in bed. The renter’s family filed suit against the seller’s $500,000 liability policy, claiming the smoke alarms were not working properly.

Howard Miller had heard all the reasons but he still couldn’t believe the cost to insure the home he still wanted to sell.

“I even thought of moving some furniture back in and bringing in my sleeping bag,” Miller said. “But we decided to get a renter and give him a greatly reduced price. He’ll have his stuff in there and make sure the real estate agents have access to show it.

“He won’t have to pay market rent and we’ll save a ton on the insurance premiums because it’s occupied.”

Areas of KENTUCKY We Buy Fast

Areas of INDIANA We Buy Fast

Hear What Others Have To Say…